Admittedly I have been known to binge on contemporary romance, the literature kind and the movies. However, I at least try to find the well-written kind. Despite this, when I was discussing my secret love of contemporary romance with one of my closest friends, she told me she despised it, and found it boring and unrealistic.

This was my first pause for thought; unrealistic. It had me wondering, what do we call a realistic romance? Do we want to read/watch a ‘realistic’ romance? Or do we want to be wooed and blown away? 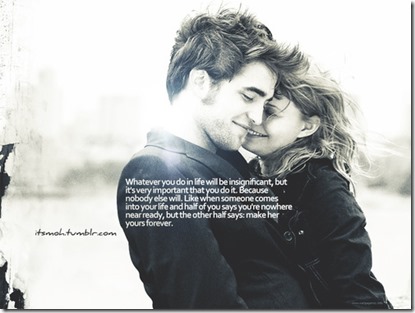 Recently I just watched Love and Other Drugs which stars Anne Hathaway and Jake Gyllenhaal. The film has a 6.7 / 10 rating on IMDB and was nominated for 2 Golden Globe awards. So it appears the film is being taken seriously in the movie industry?

Yet, it still appears to have such a mixed response. Some hail it as being a champion of the romance-comedy genre with the take on Anne Hathaway an individual suffering from Parkinson’s being well portrayed and provocative, whilst others claim its another mindless romance, filled with crude language, sex scenes and being a typical plot line of a sick girl falling for a bad-boy. Why is it we get such mixed reviews?

Personally, I think there comes pros and cons from every contemporary romance film, which again, is based on personal preference. However, is the media designed to project moral messages and ideals to us even if overlaid with fun, flirty and flighty behaviour? Or is it supposed to be some strict, moral message in a boring fashion? Honestly, I do not believe many people would listen to something they perceived as being dull and boring. At least Love and Other Drugs manages to show by the end of the film, a steady, loving relationship where you can stand by somebody and care for them can be more fulfilling than a casual fling. It represents many values that I think are important, and is that really a bad thing? Even if it includes sex and naked skin, is that not again something that human beings want to see?

Obviously there are times in reading a book, or watching a film where you think “if only that happened in real life” because I do not think many times you will get a guy chasing after you down the street to declare his love, or driving across the country, or chasing you to the airport as I recently witnessed on an old episode of Friends when Ross Geller raced to the airport after Rachel Green. I mean, it would be nice, but when it came down to it, I think if somebody did such a thing for me, I would laugh or be awkward and not know how to react. However, I think I like reading these declarations of love and thinking maybe somewhere, somebody does such things because it makes me feel happy, and that is why I read right, to have my emotions played on, to be entertained and made smile? I want my main love interests to wooo me, to draw me in.

“I’ll fight it. I’ll fight it for you. Don’t you worry about me, Hazel Grace. I’m okay. I’ll find a way to hang around and annoy you for a long time.” I was crying. But even then he was strong. holding me tight so that I could see the sinewy muscles of his arms wrapped around me …”

I want a Levi (Fangirl) who will hang around my roommate’s room to see me, to walk me home in the dark, to tease me, to bring me out of my shell…

“I mean…” Levi leaned forward, hands still fisted in his pockets. “I mean, I spent four months trying to kiss you and the last six weeks trying to figure out how I managed to fuck everything up. All I want now is to make it right, to make you see how sorry I am and why you should give me another chance. And I just want to know—are you rooting for me? Are you hoping I pull this off?”

“I’m rooting for you,” she whispered. She wasn’t even sure he could hear her from the bed.

Levi’s smile broke free and devoured his whole face. It started to devour her face, too. Cath had to look away.”

I want myself a Finn the Robot (The Mad Scientist’s Daughter) who is smart and heartfelt.

“I can’t tell you what it means to be the only one of my kind,” he said. “I can’t… There is a lack in myself. But your thesis almost filled it in. It was… a start.”

“No one feels like you do, so every brush of your skin is a cruel reminder of what I’ve lost. I can barely stand the sight of you because you’re more beautiful than I’ve allowed myself to remember, and when I cut that wire off Maximus and smelled you all over him, I wanted to kill him more than I’ve wanted to kill anyone in my life, yet I couldn’t because of my promise to you.”

These are just a few of the many fictional crushes, and there are probably many more, but these are a few of the more recent ones. Who are your fictional crushes? (because I severely hope I am not alone in my love of fictional characters *slinks away to hide in a corner* if I am). I’m going to leave you with one of the most iconic moments in film history and an all time favourite romance of mine, this film will always have a special place in my heart.

19 responses to “Dilemma of Contemporary Romance”

Thanks for dropping by, I really appreciate every single view. If you're a fellow blogger I'll return follows/comments. Unfortunately this is an award and tag free zone because of time constraints, but I appreciate the thought. Cancel reply