Gone with the Wolf 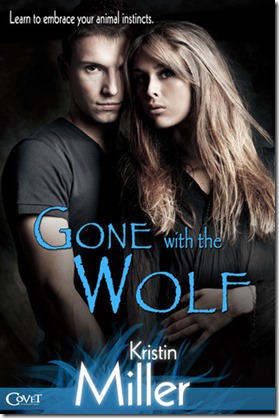 Gone with the Wolf by Kristin Miller

CEO and alpha werewolf Drake Wilder has given up the search for his one true love. When he discovers that she’s a secretary in his company, Drake’s primal instincts kick into overdrive.
What he wouldn’t give to have her fingers rake over his body instead of the keyboard…

Free-spirited bartender Emelia Hudson wants nothing more than to make her Seattle-based bar succeed. But when profits decline, she slips into a dress suit and secures a nine-to-five. After learning that her bar has become property of Wilder Financial, Emelia is determined to get some answers.

Two can play the ruthless business game. If only her attraction to the boss wasn’t so intense…
When Drake’s twin brother senses that Drake has found his match—and now inherits their father’s billion dollar estate—he hatches a plan to take Emelia out. Drake vows to protect her at all costs, but he might have to pay with his own life.

Originality was rather lacking in the department of Gone with the Wolf. It felt like it fell into the typical cliche of Rich Man + Poor Woman + Angst over social and monetary value = Happily Ever After. Having said that, there still managed to be entertaining moments that I’ve labelled the “good bits” but there were quite a few “bad bits” to match those that damped my overall enjoyment of the book. Overall, it was rather forgettable too, which makes it harder to enjoy a book when nothing strikes you as entirely original.

Honestly, it was quite a while ago since I read this, and I’ve found that much of the details have slipped from my memory. However, Emelia Hudson the protagonist of our story I do recall grating on me quite a lot. She was supposedly free-spirited and whilst she had spunk enough to rebel against Drake, she quickly became drawn to him and didn’t provide that much opposition to him. There were moments when she was clearly against being dragged into his world and suspicious, but as it seems with the paranormal-romance genre, she accepted things a little too readily.

Drake was a rather interesting character, I couldn’t quite pinpoint his emotions at all the times and he was a little stupid. He was also a little frustrating, but eventually he unravelled to see the typical romance figure who didn’t quite understand the girl to start with as he bulldozed in as the “alpha male”. Luckily he rectified that by the end, and I managed to like him a fair amount.

His face didn’t twitch, flinch, flex. Nothing. He barely responded to her presence at all. Like the kiss last night never happened.

The concept wasn’t overly original, but the idea was Drake had to find his “mate” before his evil twin brother to gain control of their father’s pack. However he’d been searching for a long time and about given up hope on that aspect. It makes for a rather, race against time aspect in whether Emelia will accept him and adds some tension. Nevertheless the typical bad family relations that usually provide that angst for paranormal-romance was present and a little tiresome.

Ultimately I enjoyed the romance was a strong, rather entertaining aspect that certainly provided a few shivers. It was more or less the focus of the story, the relationship that kind of occurred rather than a progressive relationship. In addition the “plot” of the story tended to focus largely around the romance, so there wasn’t much substance to the novel.

She gasped for air, clutched at his back, and ache to taste more of his lips.

He dove down to her neck, smudging deliciously wet kisses along her collarbone and back up to her chin.

Overall, Gone with the Wolf is a romance that’s great for a quick, rainy day read as just something light and fluffy. There isn’t much too it and it’s not the best paranormal-romance or werewolf story, but neither it is the worst!